How To Use Free Mind, Part One: Creating A Simple Plot 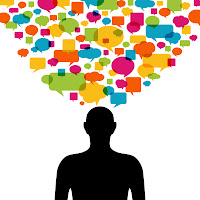 It’s been a while since I blogged, and I thought I’d start blogging regularly again. The idea for this 3-part blog series came to me randomly while using the free mind map software called “Free Mind”, which you can download here (it lists the versions by operating system).
I’ve found mind mapping to be an effective way to just get an idea down on paper, without worrying about structure or character development or anything specific about the story. When you mind map a plot in particular, you just focus on the basics first and anything specific later.
The basic things you’d need for your mind map are:
·         Title
·         Main Character(s)
·         Conflict
·         Theme
·         Setting(s)
·         Genre(s)
For an example, I’ll show you the mind map process I’d use if I were to mind map an old story I wrote years ago, back when I had no clue what the rules of writing were. If I were to rewrite it now, it would need a major reworking of both the plot and the characters. But for the sake of the mind map example, it will also allow me to keep it simple.
The story, at its core, was a coming-of-age fantasy (specifically, portal fantasy) novel, about a girl named Lucille who discovers a mystical doorway in a forest and a wolf chained by that door. The wolf—a shape shifter—explains that he has been waiting for years and years for someone to set him free and for that someone to journey back to the world beyond the door, and help him vanquish the evil. Now, we have our basic idea.
Opening Free Mind, you should get a blank mind map. If not, go to File> New to get a fresh mind map.
In the middle of the page you should get something like this:

Click that circle and you should be able to edit the text inside the circle (called a “node”)
Here’s where we insert our title: SAPPHIRE PRINCESS. Depending on your novel, the title will be different. If you are still trying to figure out your title, put: WIP in the node bubble. To help figure out your novel’s title, I wrote a previous blog post on finding titles here.
Next, right-click that bubble and you should get a lot of options. Click the option with the light bulb, labeled ‘New Child Node’. A line should appear with a text box.
Label this text box: Main Characters.

﻿
Next, who are your main heroes? Do you have a name for them? If so, right-click the Main Characters node and click New Child Node (or press: Insert, on the keyboard) however many times to insert one or more main characters. In this case, I have at least four main characters: Lucille, who is the main heroine. Her mentors—the wolf-shifters—Akoto and Silver and, finally, the main villain, Resmiel.
Within each character’s text node, write as many attributes about them that you know. Age, gender, race, odd clothes or physical looks, favorite color or pet, anything specific to them within the story like powers, or their past, or their role within the story—anything that comes to mind.
If you can’t figure out something or if there is a reason for that trait important to the book, write the question or elaborated answer in a child node connected to that particular trait, like in the example below: 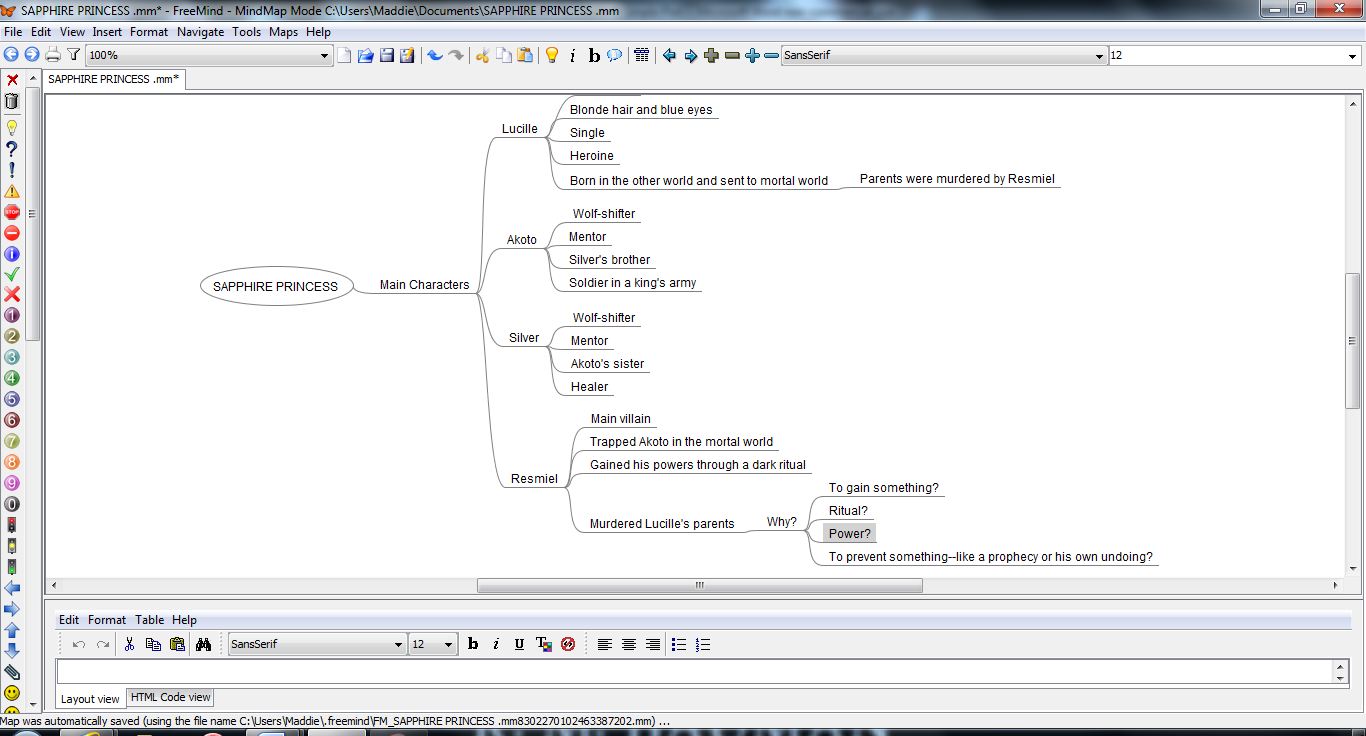 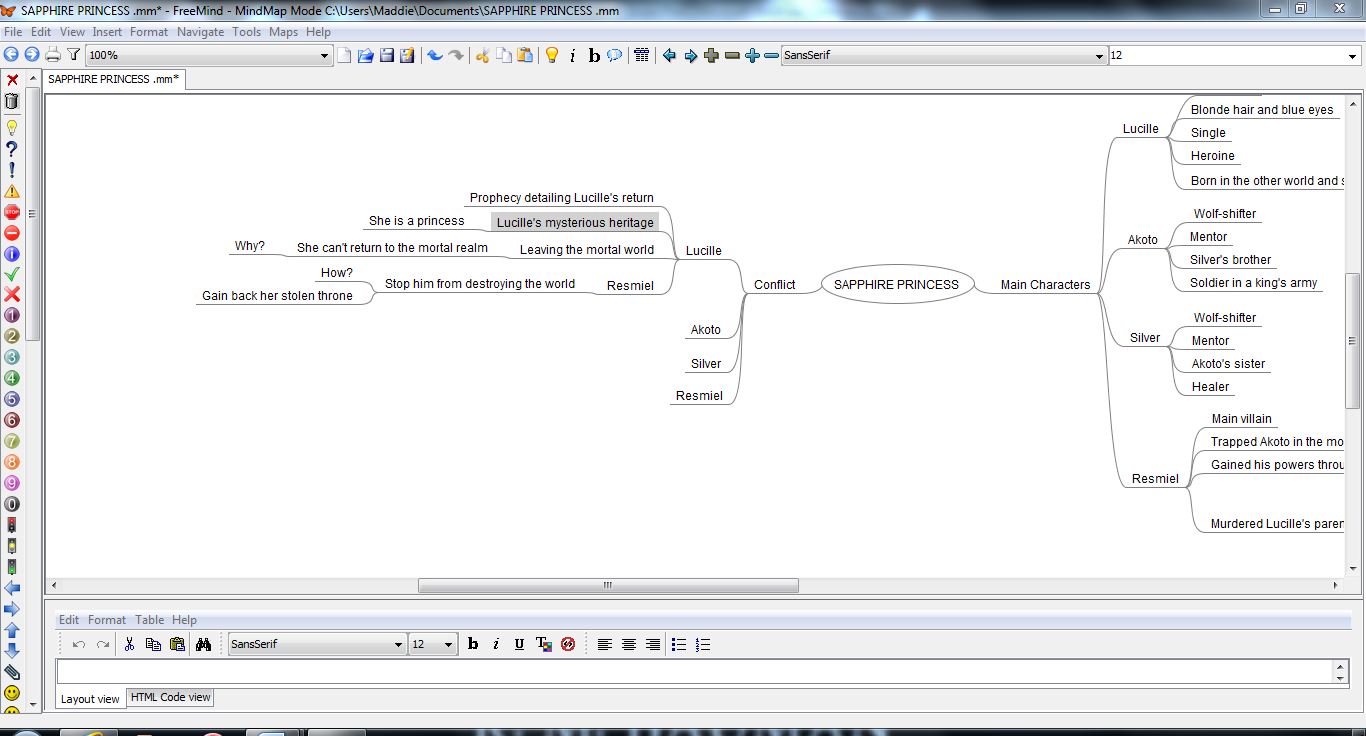 Creating a new node from the title node, the next thing you will detail is: Theme. Theme is possibly the most challenging thing to boil down in a book. What are we trying to say, beyond all those perfectly constructed metaphors? What are we trying to tell the readers? What does this scene, this character, this idea, object or symbol contribute to the overall book, to the big picture—the theme of the book? Your theme could be anything from racism, to good vs evil to love conquers all…so long as the scenes and the plot reflect it. 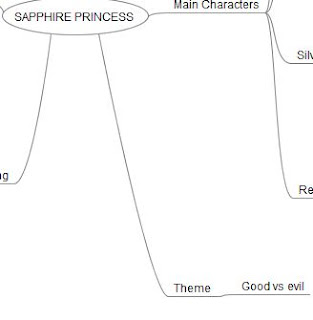 Next would be Setting. Where does your story take place? What time period? What’s the name of your city or town or fictional world?  What details about the place(s) are important? Put them in nodes if needed.

Finally, the final node you can add is: Genre. What is your novel? Where would you put it on shelves? Would it be a paranormal romance? A fantasy? A historical? A science-fiction novel? As each genre has its rules and requirements regarding plot, it’s important you know what exactly you’re going to write. You can’t have novels straddling too many genres, otherwise it gets confusing for both readers and publishers to know exactly what group and to whom this book is marketed for.

Hopefully this process, while time-consuming, will be helpful in creating a sort of outline and a plot for your novel.
Stay tuned for part two of this series, How To Use Free Mind, Part Two: Figuring Out Character Conflict.
Thanks for reading!
- HC
﻿
Posted by Madelaine Bauman at 8:43 PM

Writing became such a process of discovery that I couldn't wait to get to work
in the morning: I wanted to know what I was going to say. ~Sharon O'Brien

Craft a poem around this metaphor: A flourish of hate.

Whether you'd like to read a blog post about a specific topic, recommend a book for review, or would like to be a Featured Author...please email ftlow.blog@gmail.com

Think your blog is worth a look? Tell us why. You just might win our Bloggerific Award!

*Don't forget to check out the latest polls at the very bottom of the page! Cast your vote!** 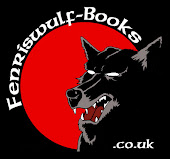